Energy Absorption is the Name of the Game 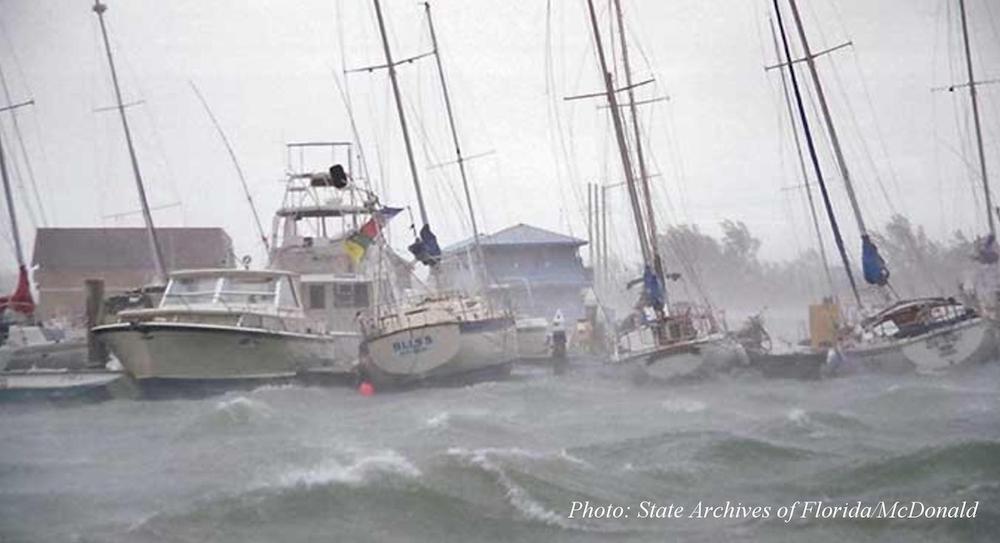 Hurricanes and severe storms never fail to damage boats, yachts, docks, pontoons, and anything in their path.  In gale conditions, the chain in a conventional mooring extends until it is almost straight.  When this happens, the elasticity provided by the catenary curve is lost.  The chain becomes a rigid steel rod between the bottom anchor and the boat.  Any additional increase in the forces of wind or waves must be absorbed by a component in the anchoring system.  Something is bound to fail.  The anchor yanks loose, the pennant breaks or a cleat pulls out.  And it’s not just with chain that this is an issue.  Other types of mooring systems lead to similar outcomes because dynamic forces are not fully considered in the engineering of products.

Many people get confused by quasi-static vs actual dynamic forces.  For Single Point Moorings in a storm, energy absorption is the name of the game.  Anyone that believes that quasi-static equations work in dynamic environments has never been on a boat in a storm… it’s not a static event!  Waves are dynamic events and boats will move relative to anchors; that’s when mass becomes a factor in the equation. Most moorings follow some sort of a progressive curve where force increases as a function of deflection or stretch, not unlike the catenary effect of a chain mooring.  As a mooring line stretches more and more, the force increases exponentially.  Most ropes are limited to under 20% stretch at working loads.  Other products are designed to stretch to a certain percent, maybe 50%, before some sort of limit line takes over (e.g. a tensile rope with a break strength of 18-24,000lb (8-11,000kg)).  Once the limit line has absorbed as much energy as it can, the force skyrockets at which point any additional wave, wind or current energy will break the weakest link in the system, probably the boat cleats.  In many cases, the actual mooring will still be intact.  Even so, we consider this a failure.  The cleats broke off and the boat ended up washed up on the rocks, leading to $100,000+ of damage.  The mooring did not do its job, it did not absorb energy like it was supposed to to protect all other parts of the system and to conserve the boat. The beauty of the Hazelett system is in the shape of its force curve and the impressive amount of energy that it can absorb.  At max working load of 2,880lb (1,300kg) at 100% stretch, a 10ft (3m) quad system will absorb over 14,000ft*lb (19,000Nm) of energy.  At this point, the Hazelett force curve flattens out to absorb even more energy without exceeding the breaking load of other components.  At 50,000ft*lb (67,800Nm) of energy absorption, we are still below the 200% stretch to which every rode is conditioned.  At over 400% stretch, the load shoots up, demonstrating a generous safety factor and building confidence in the system’s reliability.

Energy absorption is the name of the game.  Neglecting shifting wind, current, and harmonics in base calculations, all critical in Single Point Mooring calculations, will lead to over-stressed pendants, accelerating chaffing and breaking cleats off.  If you don’t want your boats washed up on shore or your docks destroyed every time there’s a storm, keep energy absorption at the forefront of your mind when deciding which mooring solution to pursue.

Monthly insights on the world of yachts and docks!

You have Successfully Subscribed!